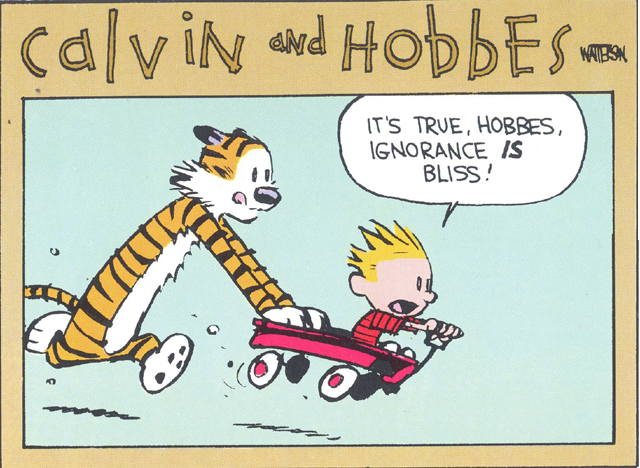 In my paper, “New World Religion,” I commented on the fact that “The Mind Has No Firewall,” stating that our minds, those lumps of gray matter that run our body and life, have no protection against a number of non-biological viruses such as subliminal programming, suggestion, behavior modification and even active mind control. Our computers, however, have very extensive “firewalls” that block out all these unwanted intrusions from other computers on the Internet. If we were only that careful of our own minds, then The Powers That Be would be out of a job, because they could not influence the “masses” to the extent they do to stay in power—and they put a great deal of time and effort into it. A reader of that paper suggested that I should expound upon this topic as a blog entry.

All you need in this life is ignorance and confidence:
then success is sure.

They say, “knowledge is power” and “ignorance is bliss,” and I have come to notice that humanity, in general, seeks happiness more than anything else and is all too willing to sacrifice knowledge for that blissful ignorance. And that bliss takes many forms. It does not take a lot of effort to trace all these “provider bliss” systems back to our very own governments, the class of Annunaki-descended nobles that rule the world. And those systems include: smoking, drinking, recreational drugs, charity, religious devotion, political power, corporate power… it’s quite a long list and now includes iPhones, freemium “apps,” music players and all sorts of electronic devices. But no surprise there, because, like their blue-blood ancestors, they want controllable slaves, not an evolving species.

Most people treat this as a personal choice between master and slave. Granted, there are those that desire slavery—and a surprising number of people want someone telling them what to do, where to go and how to think. Free will and independence is being bred out of humanity, bit by bit. What I find frightening is that creativity, imagination and hope for a better future are going along with it. But it isn’t a situation of “either you’re with us, or against us,” because there is an alternative to rivalry—this little thing called rapport. 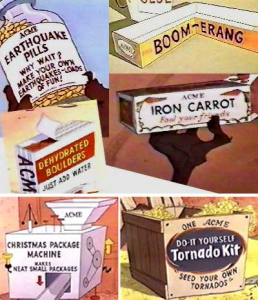 Being a Science Fiction buff, I grew up with classic ‘50s Sci-Fi, where all sorts of new ideas and inventions were being presented, sometimes with dire consequences that made mankind reflect on the choices behind his decisions: was it ethics or ego? And those classic “The End?” messages had a positive effect on us kids of the time, making us think twice about what we did—and why we were doing it.

I’ve noticed how science fiction has changed since then. Take a series  like the Outer Limits (1963) or the Twilight Zone (1959), with their thought-provoking story lines that reached right into the core of your unconscious. By today’s standards many of these stories are “slow” to get going, but when they do, they reach out and grab you and you’re no longer in the living room, but right there with the characters, experiencing situations as they do. (I still won’t watch the Outer Limits episode, “Wolf 359” after sunset!) But these days, films (or “movies,” as we Americans say) are nothing more than the producer playing a video game, while the characters run, jump, shoot and try to defeat simple challenges on their “quest.”

I mention this because good writing is a kind of mind control that opens doors in the mind, invoking a sense of curiosity and wonder and engenders that rapport of the “peaceful explorer of the Universe.” Bad writing, however, closes those doors not because it is bad, but because it makes readers not want to read, at all, to find the good writing.

The Masters of this world have learned how to engage their mental firewalls to protect themselves from the very propaganda they shovel out on a minute-by-minute basis. The slaves, however, have been trained over the course of their lives on how to keep those firewalls shut down, under the guise of “more bliss off, than on.”

The remainder of this post is a discussion on how the mental firewall works, so if you desire “ignorance is bliss,” then stop reading now. (Click on image to zoom)

For those that do not want to end up face down in the gravel, the first step to a solution is to clearly identify the problem—unlike our rulers that come up with a solution, then create a problem to implement it. So the problem is: how do I become conscious of the influence of others?

The “remote control” of the human mind has been a popular and much sought-after topic of the rich and famous for centuries. And in order to discover what they found out, all one has to do is to look in the places they don’t want you to look—namely all the psychology that they “poo-poo” and call nonsense (while scarfing up those very books and papers for themselves). With a little pre-20th century research, one big area stands out: Mesmerism, the research of one Franz Mesmer (1734-1815) of the energetic transfers between life, the Universe and everything. If you notice the comments surrounding Mesmerism, like the dictionary comment, “made a living at mesmerism and the selling of medical remedies of dubious value,” you’ll find they are actually using his techniques to make you “dubious” of the topic, itself, through association with well-known medical cons. This is one of their favorite techniques, because they can claim “I never said mesmerism was dubious,” because technically they didn’t—but that word “and” is a logical association—BOTH must be true, for the statement to be true—and the statement is presented as truth, so your minds does the logic and assumes both premises must be true. It’s basic logic, and the brain is logical.

Mesmer is basically the root of the mind control tree. There were others before him, but their works are not well known, nor easy to obtain. I would suggest you do a little research on Mesmerism and get the general idea behind “animal magnetism,” because you will soon realize that this magical “magnetic fluid” they speak of is ætheric—it exists in 3D time, the Reciprocal System’s “cosmic sector” or the soul of the living organism. Once you understand that, you will understand what Mesmer discovered.

In the mid-1800s, Mesmerism evolved into a field of study known as Etherology (having recognized the ætheric effects at work in Mesmerism) and the science of Phreno-Philosophy, a comparison study of Mesmerism and magic, delving into hypnosis, sleep learning and of general consciousness. If you do not mind 19th century writing style, there is an excellent public domain book available by J. Stanley Grimes, with the humongous title of: Etherology, and the Phreno-Philosophy of Mesmerism and Magic Eloquence: Including a new philosophy of sleep and of consciousness with a review of the pretensions of phreno-magnetism, electro-biology, &c. (Boston and Cambridge: James Munroe and Company; London: Edward T. Whitfield, 1850).

If you desire to learn the fundamental concepts of how your mind is controlled, then read Etherology. Granted, it is written on the premises of 19th century science, before they “poo-poo’ed” the concept of æther, so it is not an easy read—but it is a fascinating one. Just the comment on the title page says a great deal to me, personally: “All the known phenomena of the universe may be referred to three general principles, viz., Matter, Motion and Consciousness.” These folks understood, a century before Dewey Larson did, these simple, underlying principles.

The modern interpretation of these principles tends to lump together under the concept of Neuro-linguistic programming. NLP, as it is called, makes use of the brains phenomenal ability to recognize patterns and, like many of Derren Brown’s tricks, pre-programs responses to these patterns so by the time you “figure it out,” you already have the solution that was given you—and are amazed! (I love Derren Brown’s series; much can be learned if you pay close attention to what he does, and understand that most of the time he is telling his “mark” how to respond, rather than letting them make a choice for themselves.)

We are constantly exposed to NLP through marketing departments by their visual advertisements and commercials. What they program you to do is much like the “dubious” situation above. They take two, unrelated concepts and create a logical connection between them, so one infers the other. The most common is sex + product = “you get sex if you buy this product.” They are going after that “animal magnetism” of Mesmer—what a surprise that they don’t want people studying it, as they might recognize the trickery.

This short post is the basis of how to become conscious of the unconscious influences that bombard our consciousness almost nonstop. It is imbedded in every television show, commercial, film, movie, computer game, app and even the music you listen to. Watch for “product branding,” where they stick product names in obvious places during a show, but never actually mention it. You like the star of the show, the star likes product X, so therefore you must like it—and if you like it, you’ll find yourself just dropping it into the cart without even thinking about it, as you’ve been programmed to know you already like it.

The Mind HAS a Firewall, but it is not something you can go out and purchase at Wal-mart–you need to “do the work” to become conscious of how you are being manipulated, by getting the fundamentals of how your mind works and how it is being manipulated. Then you can catch them in the act–and each time you do, you’ll find it is easier to catch them again.