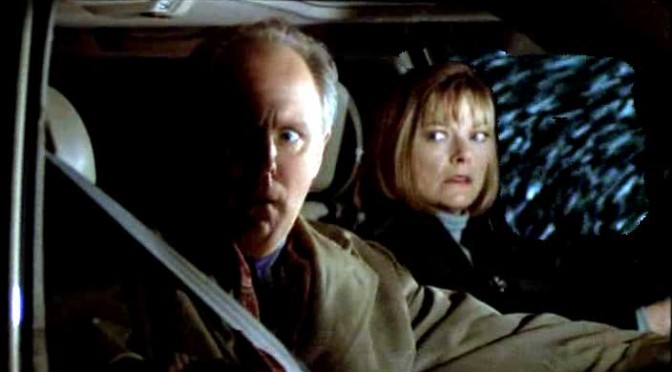 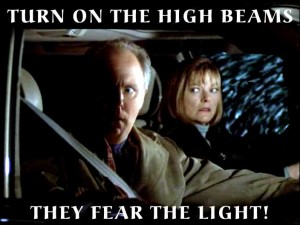 Has the mind of man been invaded by extraterrestrial microorganisms that are consuming his intelligence, returning him to the status of good slaves to the gods? Well no, but it certainly looks that way at times.

I was walking by the local High School the other day reading the chalk graffiti covering the sidewalks around the campus. They seem to have a preference for Satanic symbols and death messages, with the pentagram being one of the most popular. Though it is obvious they have no clue as to who or what “the Satan” actually is nor any idea on how magical symbols operate; it is just random scrawling to try to spook the Mormon teachers, rebelling against the worship of Jesus being forced upon them and taking the position of the adversary (what “Satan” actually means). Scattered between the pentagrams there were many editorial comments regarding their trainers (I hesitate to use the words “teachers” or “educators” these days) brazenly spelling out “SKOOL SUKS!!!” not 50 feet from the large, metal letters emblazoned across the brick wall of the school, spelling out “HIGH SCHOOL.”

Now it occurs to me that these kids have been exposed to the word “school” on a near-daily basis for at least 8 years now and still have not figured out how to spell it, despite all the exorbitant schools and government-backed “education.” So the only possible explanation must be that their minds have been invaded by extraterrestrial albino brain chiggers1 sucking out all their intelligence. After all, the systems of Education want you to know what is going on in the world so you can think for yourself and see all the false flags, deceit and trickery your masters are engaging in, right?

I find it quite interesting that the “dumbing down” of humanity started around 1933 as a film industry process to create entertainment that appealed to the lowest common denominator, which was the same year that “insider info” has for world governments establishing formal relations with extraterrestrials.

The cover-ups of extraordinary scientific breakthroughs began in the mid-1920s to prevent the major energy suppliers from going out of business from “free energy” technology that was being discovered on every garage inventor’s workbench. Back then it was easy. Threaten the guy and his family, “terminate with extreme prejudice,” or discredit the idea so it would never make it to industry. Job done, easy as pie because technology had not developed to a point where communication between researchers was just a push of a button, as it is today. 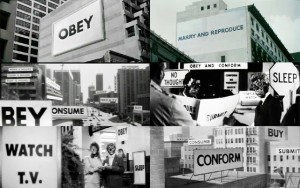 With the establishment of interplanetary relations a new situation developed—how to control the minds of the public at large, who much prefer to be entertained over educated. As Dewey Larson oft said, “complexity is entertaining, simplicity is not.” So they flipped science around backwards to make it as complex and entertaining as possible then introduced it to the mass media for distribution to the public with all the appropriate subliminal messages in place. “Obey without question!” as Doctor Who’s Daleks put it.

The manipulators of our world are very clever, not only with the subliminal images but are quite adept at using the music industry to create precise emotional responses by fostering specific “rebellious” personalities that are actually doing the bidding of The Powers That Be to encourage all sorts of criminal acts—because prisons have become privatized and big business these days with their “customers” being criminals. When you want to increase your customer base just make more and more stuff illegal.2 That is why we have lawmakers making laws, instead of representatives protecting liberties. Heck, here in the United States they have even made “being alive” a crime unless you pay the Obamacare “tax” for permission to breathe. Thank goodness that people are blissfully ignorant of this invasion of the neuron snatchers, these fluffy albino chiggers that blanket the world in silence, like new-fallen snow. 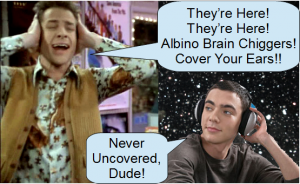 From the Hitchhiker’s Guide to the Galaxy:

A white, crystalline microorganism that dissolves upon contact with the flesh, enters the bloodstream, migrates to the brain and breaks down molecules of intelligence into their component particles, known as morons.

Whatever the cause, the effect is this: the genocide of intelligence. And what people do not realize is that in the ancient texts the word for intelligence is the Medieval Latin animus—the very same word they used for spirit. Intelligence is not memorization and regurgitation, like a bird feeding its chicks by puking up words of wisdom… intelligence is the ability to generate abstract concepts from seemingly unrelated patterns that can be used to form new patterns that would otherwise be concealed within the dark reaches of the psyche. Spiritual concepts are abstractions as they usually do not have a physical existence, so at least for me, intelligence is the doorway to the spiritual realm, ascension and higher levels of being. So what’s it to be, my friends… the “ignorance is bliss” of the slave, or the intelligent, peaceful explorer of the Universe, tracing the route of natural consequences to infinity and beyond?

Having been around for more than a half century and growing up in parallel with the evolution of computers and technology, I find it interesting that I am constantly told how much smarter computers have become, to the point where they can now think like a man. Yet when I pull out the old programming books and compare them to what is used today, I see exactly the same thing. If, then, else, input, print “Hello World!”, let x=2+2. It is not that computers have evolved to think like man—it is that man has been devolved to think like a computer, complete with the “New World Order 8.0” operating system and apps, fully installed at birth, for your convenience.

Most of mankind has been exposed to extraterrestrial albino brain chiggers from an early age and is taught to “cover his ears” by the powers that be, but not to keep them out—to keep them in.

So take off the brain condoms and pull out the mental floss—there is still the possibility of a better world out there but you need to see and hear the reality of it, for yourself.

2: In the United States, if you include Federal and State Codes and Regulations along with all the “case law” that supports it, well, Ronald Gainer of the Justice Department said, “you will have died and resurrected three times,” just to count them! Ron Paul estimates that 40,000 new laws were passed just on the 1st day of 2012.